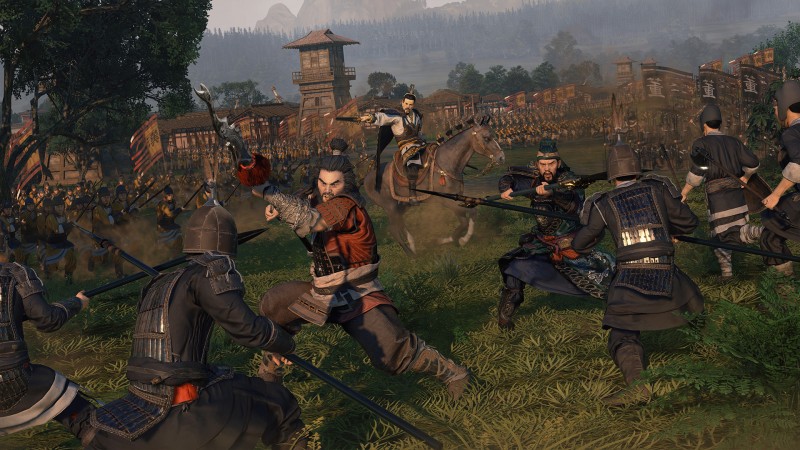 As a franchise, Total War is known for realism, with lowly axemen eating barrages of arrows as trebuchets tear into city walls. Then the Total War: Warhammer games bent those rules, and now that bending continues with Total War: Three Kingdoms,  albeit in a less extreme fashion. This installment embraces Chinese fantasy in the era of Romance of the Three Kingdoms, with larger-than-life commanders and their reigns. History-driven battles take a backseat to lively hero duels and big personalities. The experience is more enjoyable if you’re willing to suspend your disbelief and engage in a massive rise to power with a bit of wondrous awe – as if someone was regaling a crowded feasting hall with an embellished tale, rather than coldly narrating from the annals of a historical text.

On the real-time battlefield, the moment-to-moment tactics are a bit underplayed because of the focus on the legendary commanders and their skills. With various commander types to pick from, hooking them up with weapons, armor, and horses and tapping into their special abilities to turn the tide of battle feels flavorful and suitably epic. Watching two magnificent lords tear each other apart in a crazy one-on-one in the middle of a huge fight doesn’t feel like traditional Total War, but it’s pretty satisfying all the same. Battles are often won and lost on the backs of these epic encounters, which can leave the little men out.

One of the ways to play, called Romance mode, also has less of a realistic emphasis on how your armies consume resources and supplies; it’s more about letting you get in and play around with your whimsical warriors of note. A separate option, Records mode, lets franchise purists dial back on the fantasy elements, with none of the insane powers and more realistic resource management for armies, but the major draw (and the place where the interesting innovation is happening) is on the fantasy-tinged side of the battlefield.

Three Kingdoms is beautiful on the turn-based map and beyond. Cherry blossoms bloom on your development tree, snow splashes softly across the land, and awesome animated cutscenes punctuate world events and major occurrences, capturing the pure romantic notion of ancient China. Your road to emperor through a combination of military might, city-building and expansion, and shrewd diplomacy is paved with elegant and exquisite detail that make it one of the most aesthetically appealing titles in the entire series.

Diplomacy, espionage, and trading are easy to work with and essential to ruling your ever-growing sphere of power off the battlefield. A streamlined system allows for single-click dealing and negotiations if you just want to get on with the next turn. Managing your relationships is critical, and it feels good to be held to your alliances and contracts or face fairly significant consequences. Myriad opportunities arise to make fun choices outside of your standard building and battling – faking my own assassination attempt to boost my image was a fun little side moment. Your characters also build and destroy reputation with each other in battle, so you can separate those that don’t get along and put friends and family together. Your court is always ready to give you bonuses by installing commanders in various roles and positions.

While those looking for the pure historical war experience may find themselves wanting a bit more, with such a critical emphasis on the commanders and their supreme battlefield presence, those willing to indulge in a more prodigious past have lots to enjoy. With strict historical adherence out the window and a bit of a streamlined tactical combat experience, Three Kingdoms still has a lot to offer the strategy enthusiast.