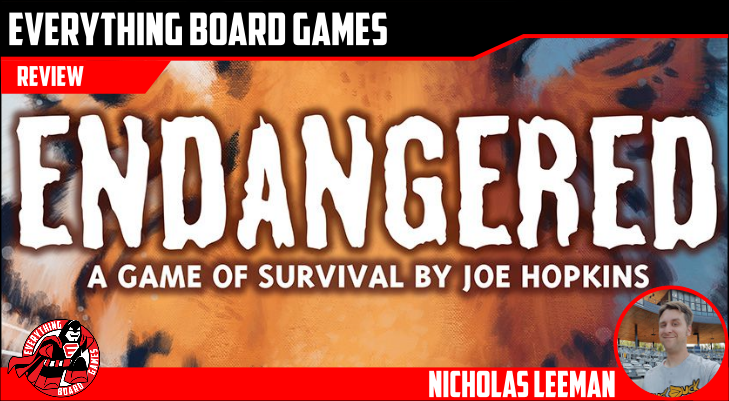 WARNING: This is a preview of Endangered. All components and rules are prototype and subject to change.

tl;dr: Save the whales, cooperatively. Or, in this case, Tigers. Maybe whales come later. Probably.

Getting to the Game: Choose which animal module you’re taking on, and set up the board per that particular animal’s rules. A set number of animals will populate the board, and you’ll start at Year One. Randomly choose 6 face-down ambassadors and put the rest back in the box. Each player chooses a personality, and then selects one of that personality’s special powers. Take that personality’s colored dice, and get ready to do some good. 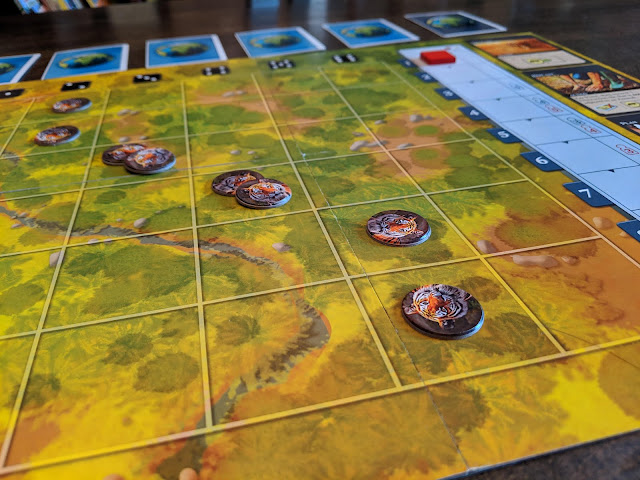 Your purpose in Endangered is laser-focused: You need to convince at least 4 ambassadors to vote in favor of saving the animals. It won’t be easy, though, as each one has their own requirements to vote alongside you. You’ll lose if the population of your chosen species drops below a mating couple, their habitat is destroyed beyond repair, or if you wait too long to fulfill the needs of the ambassadors. It’s a jungle out there.

Playing the Game: Every turn is going to find you with limited options based on your available dice. Each player has three action dice that they roll at the beginning of their turn. You assign these dice to the available starting actions, as well as any available actions added by your conservationist friends in previous turns. The catch here is that when you add a die to an action in order to take it, your die has to be larger than any of the dice already there. Lower rolls are awkward, forcing you to likely take actions that no one has taken yet. Higher rolls are similarly prohibitive, as they’ll act like blockers, preventing anyone else from doing something until your next turn. 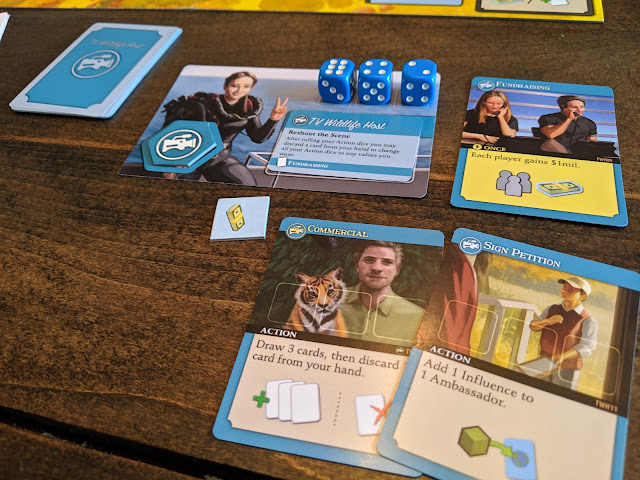 Once you’ve fully resolved all three of your actions, it’s time to check to see if the animal population grows. Putting two or more animals together in a single square on the board forms them into mating pairs, and the more mating pairs there are, the more likely it is that one of them will have an offspring. Tigers, in the case of the preview version, are fiercely territorial, so once they mate, they split up. If they have nowhere to go, due to other tigers about, or deforestation, the mating tiger dies off, undoing the work you’ve done by getting them to mate. It’s this delicate balance of keeping pairs together while respecting the specific needs of the animals you’re protecting that will force you to make some very tactical choices. 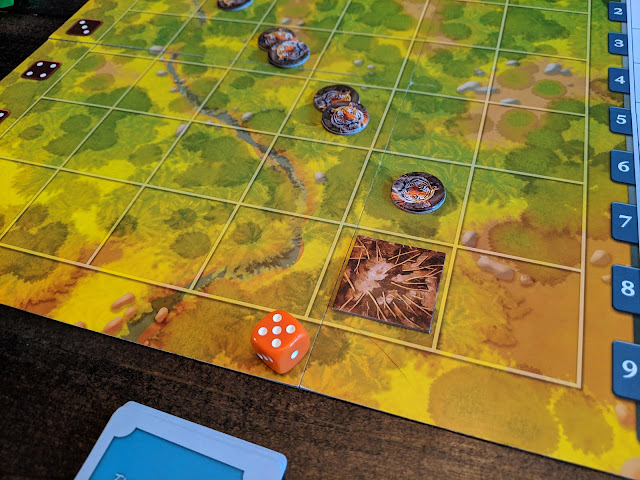 Balancing actions and mating pairs is all fine and good, but the real work comes in unlocking and getting as much influence as you can with the ambassadors, and doing it early. Influence generally means money, so the more fundraising you can do, the more political capital you’re able to leverage. This is the only way to win the game, so you have to focus on this. Overall, Endangered plays like a very political game of Pandemic, where most of the game is working against you, even the animals themselves, but if you manage to keep everything under control, you’ll see your flock flourish. 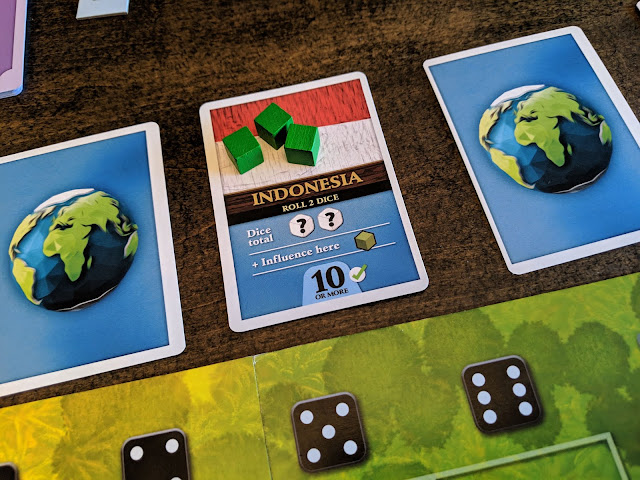 But is it fun? It is, but it’s also massively depressing. It’s a real-world simulator, so you’ll have to contend with deforestation, apathy, stingy wallets, and politicians who only really care about themselves. The actions and impact cards are all based in real life, so while this game does technically cross the line into edutainment, it’s still a game that you’ll want to play without feeling like it’s more educational than it’s worth. Combining tight, high-risk gameplay with random dice rolls feels like a recipe for disaster, but there are lots of ways to mitigate the dice that it ends up feeling like you still have control for the most part. Every game that doesn’t end in success is pretty clear in where you failed, so every game feels solvable. This is a key component in any co-operative game, otherwise it can feel like you’re just beating your head against a wall. Real life is hard enough- I prefer some semblance of emotional victory in my games, and Endangered delivers.

Artwork and Components: I’m hoping that the card art isn’t quite ready yet, because it feels a little too out-of-place with everything else’s reality-based visuals. The tiger tokens are striking, and the board does a great job of tying everything together. If this artwork is indeed production-ready, it’s not a dealbreaker, it just isn’t my favorite style. 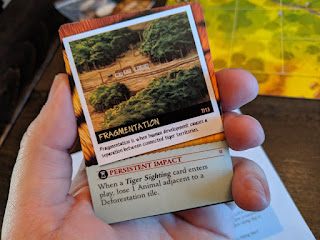 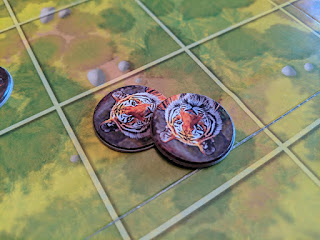 The components are similarly just-shy-of-great. The above pictured tokens are indicative of the whole game – punch out cardboard with uneven art. The tiger tokens look great, and the money tokens look absolutely abysmal. The dice are just ok – generic colored d6s, with nothing else special about them. Influence cubes are green wood. With a game this promising, I just wanted a little more attention paid to the physical aspects of it. Hopefully I won’t be disappointed with the final product. (NOTE: The KS version of the game has some very cool-looking silk screened dice)

The Good: Gameplay is challenging and rewarding enough to keep you coming back. Promises of additional modules are strong. Rules are simple enough to consider this a gorgeous gateway title.

The Bad: Card art, while likely not done yet, is lackluster. You’ll likely lose more than you’ll win.

Score: Endangered does a phenomenal job at simulating what I imagine to be a nearly-impossible problem of trying to bring back species from the edge of extinction. I’m glad that designer Hopkins seems to have found a philanthropic outlet for game design while still maintaining a high standard of gameplay, because this title has it all. I’m giving Endangered a score of Worth Protecting.

Nicholas has been a board game evangelist for over 10 years now, converting friends and family alike to the hobby. He’s also a trained actor and works summers as one of the PA announcers for the St. Paul Saints. He lives in Minneapolis, MN with his board gaming wife and son.