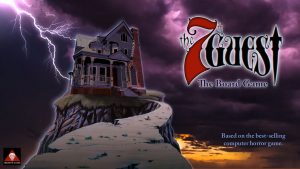 You and your friends have been invited to the mysterious Stauf mansion. As you enter, the doors slam closed behind you- locking everyone inside. To escape, you must solve Stauf’s puzzles by touring the house. But each of you is completely on your own and must compete to reach the final room.

Will you escape? Can you solve the riddles? Will you be doomed to tour the haunted mansion forever? Why did you even come in here in the first place?

At its core, 7th Guest is a roll and move game during which you’ll enter rooms and answer riddles or solve puzzles to advance. 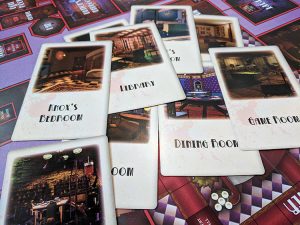 Why are we going to these rooms? IDK, lets do it anyway!

Each player starts with a stack of cards representing the destinations they must visit in the house (18, 10, or 5 cards depending on how long you’d like your game to be). Players (guests) roll a 6 sided die to advance through the house.

Upon reaching a destination, the guest must answer the puzzle or question provided on a card, read aloud by the player to their left. Once they can answer the card, they discard that destination and can begin to advance to the next one in their stack.

As they advance through the house, guests also want to be wary of the player who has been tagged by the ghost. If you are tagged, you become the Lady in White and cannot advance to another destination until you pass that mantle to another player (by tagging them).

When a guest discards their final destination card, they are immediately transported to the Little Room at the top. If they can solve the final puzzle, they win. 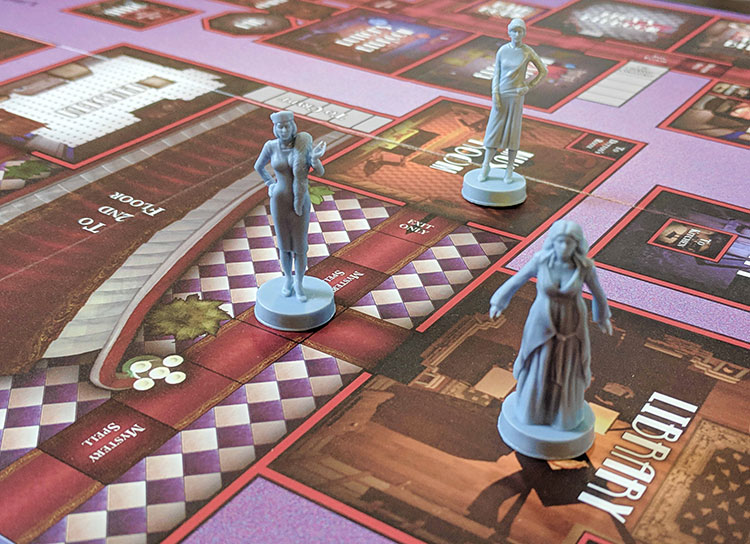 Race to your rooms, but avoid the Lady in White

1994 – Beck’s Loser becomes the anthem of GenX, my entire wardrobe consists of flannel shirts, baby doll dresses, and doc martens; and for several weeks we’d spend afternoons crowded around my 486 trying to solve all the puzzles in 7th Guest. 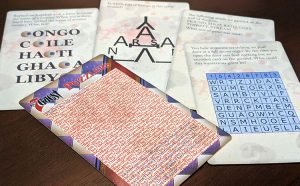 Some of the puzzles, riddles, and codes will stretch your noodle!

The board game is a trip down memory lane. You still have to largely fill in the story on your own. The ways to get around the mansion seem straightforward, but there are several traps that may reset you (or worse). The board colors and even graphic design are evocative of the original.

Unfortunately, some of this nostalgia trip is bittersweet. The roll and move mechanic is best left in the annuls of the past. The art and board NEED a fresh update. Like pulling up a classic on an emulator, you start to find the memory is better than the replay. 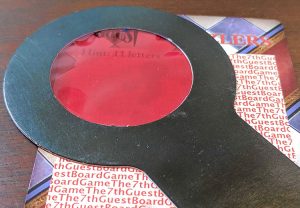 When the puzzles are good, they’re really good. You’ll feel a little like Bilbo playing riddles in the dark. But sometimes they come across like trivial pursuit questions. Not only do they entirely miss the mark, but when that happens, it’s impossible to tell who might be the intended audience as these range from 70’s pop culture, to general history, to books of the 2000’s.

The decoder style cards evoke another flash of nostalgia, but the small, somewhat flimsy red film magnifying glass you’re given to use to see the backs isn’t large enough, and between the red color and small print it’s a nightmare for someone with vision issues to try to see.

Initial excitement to revisit the first of my college years kept me going through the first play, but the cracks started to show quickly. The idea is sound – puzzle based competitive escape game – but the execution remains elusive. I may scavenge the cards for an evening of riddle solving with friends, but I doubt we’ll bring this back out as a board game experience. If you’re looking at this through a nostalgic lens, consider picking up the 25th edition of 7th Guest on Steam instead – at least then you won’t have to pack it up at the end.

Final Score: 2.0 Stars – Like our momentary generational obsession with the Crash test Dummies and Enigma, 7th Guest the board game might make you look back and wonder why 7th Guest the video game was a thing. I guess it was just right at the time. Half a point for some good puzzles and a half hour trip down memory lane.

Hits:
• Nostalgia laden revisit to early PC gaming
•  In this version, the game doesn’t crash when you try to open a door
• Some of the puzzles are genuinely clever

Misses:
• Roll and move can remain buried in the past
• Trivia is geared to – I have no idea who this is geared to – both your grandmother and your kid, but at the same time, neither of them.
• Nothing nostalgic about the $70 price tag