I’m not going to say that the release of PGA Tour Golf Shootout (Free) right on the heels of Tiger Woods doing the late career hero thing and winning the Masters was planned, because these things need to be planned out well in advance. But man, that sure was some fortuitous timing.

In fact, there probably couldn’t be a better time for Concrete Software’s officially licensed PGA mobile game to drop. Now that it’s here, you undoubtedly want to know if it’ll let you live out your own Tiger fantasy on your phone or tablet, right?

And the answer is … definitely maybe. PGA Tour Golf Shootout allows you to play on some famous real world golf courses against other players, with game mechanics that are simple to learn yet still challenging to master. It’s also designed to give you that golf experience in bite-sized chunks, meaning a hole at a time instead of 18.

If that sounds pretty similar to other golf games already out there, you’re not wrong. The strength of PGA Tour Golf Shootout is almost going to have to be those real life holes, as well as whether Concrete can work more events into the mix that correspond to the PGA Tour schedule — not a crazy notion since the game has the FedEx Cup license too.

For now, though, let’s get out on the virtual links and see exactly how to start driving for show and putting for dough.

The interface for PGA Tour Golf Shootout  is also very similar to some other mobile golf games already on the market, none of which I’ll name but some of which you probably have played a time or two. Before each shot, you’ll have a default club chosen for you, though you can tab on another club in your bag if you wish (though you shouldn’t until you know what you’re doing, as the default choice is basically always correct).

You’ll next see a close-up of your ball that looks like this: 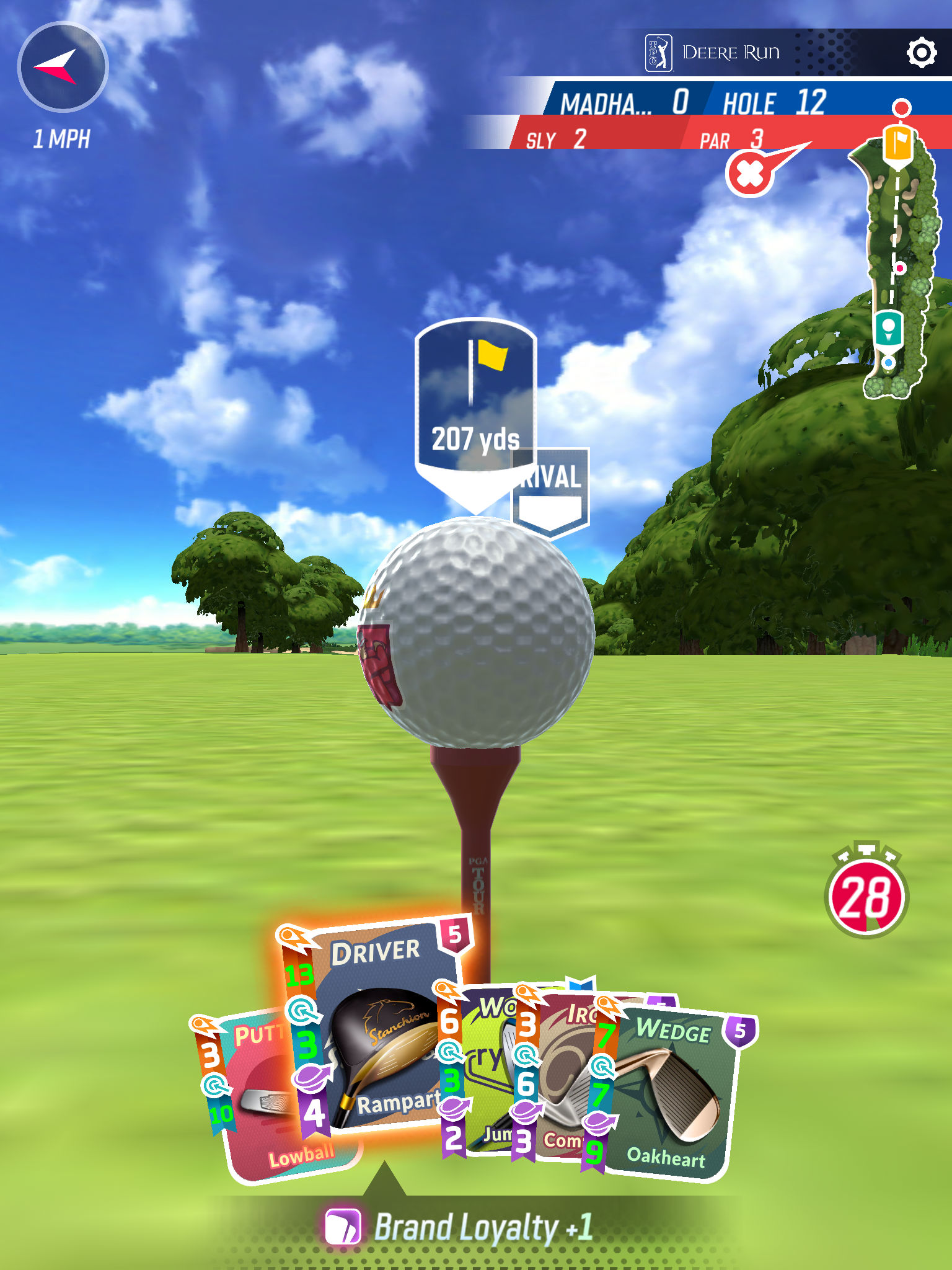 To begin your shot, simply hold down and drag back on the ball. You’ll then see your view change to something like this: 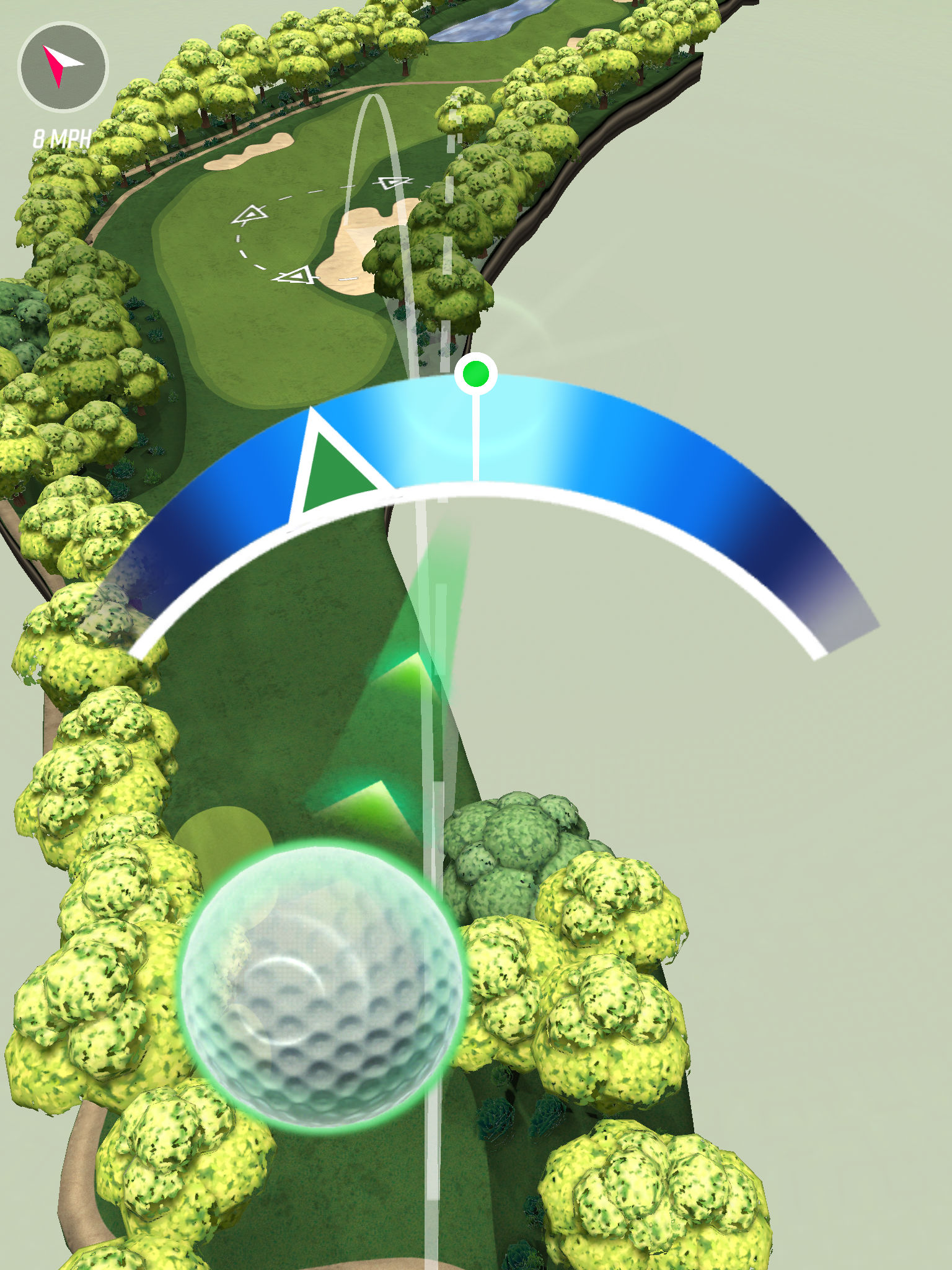 This shows you exactly where your ball will go if you if you make perfect contact, which you do by stopping the cursor right on the circle as it goes from side to side. If not, you’ll hook or slice your shot accordingly. You can hit the ball further by dragging back more, but if you go too far, the cursor will speed way up and it will be hard to hit the shot accurately.

Bonus tip: Once you get the hang of hitting some shots, you can also control how the ball behaves by choosing where you initially touch the ball before dragging back. Touching up high will give the ball topspin, making it bounce and roll further once it lands. In contrast, starting your shot down low will give the ball backspin, tending to stop it from bouncing or even roll slightly backwards after it hits, depending on the terrain where it hits.

Putting is much the same, except you’ll see a line that shows you where the ball will roll with perfect contact, accounting for the characteristics of the green. If you manage to place the end of that line over the hole so that it glows, you can be assured that you’ll make your putt if you get the cursor timing down — though it’s also possible to overdo it on velocity, so only hit your putts just hard enough to get the glowing hole. 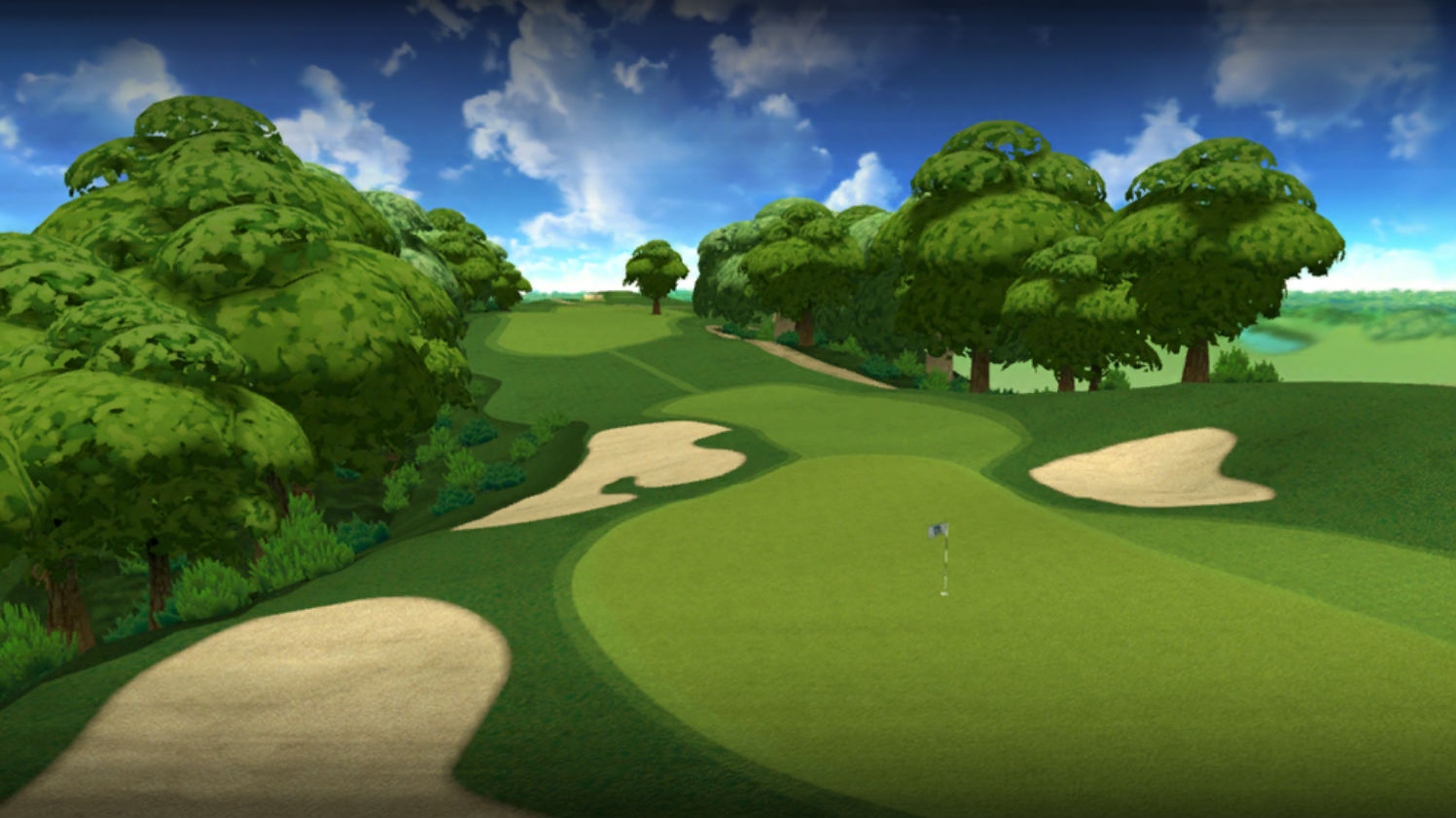 Along with practice making perfect and just getting better at the game mechanics, you can also shoot lower scores by improving your clubs. Every club, regardless of type, has three ratings, except putters which only have the first two:

Though all clubs have their own baseline stats, you can improve them by leveling the club up. Doing that means finding multiple copies of that club’s card. Here’s where you can find more of those cards:

Once you have enough copies of a given club, you’ll see a green meter beneath it and an ‘Upgrade Ready’ message if you tap on it. Then all you need is the proper number of coins and you can bump the club up to the next level. It probably goes without saying, but higher levels of clubs require more cards and more coins to upgrade. 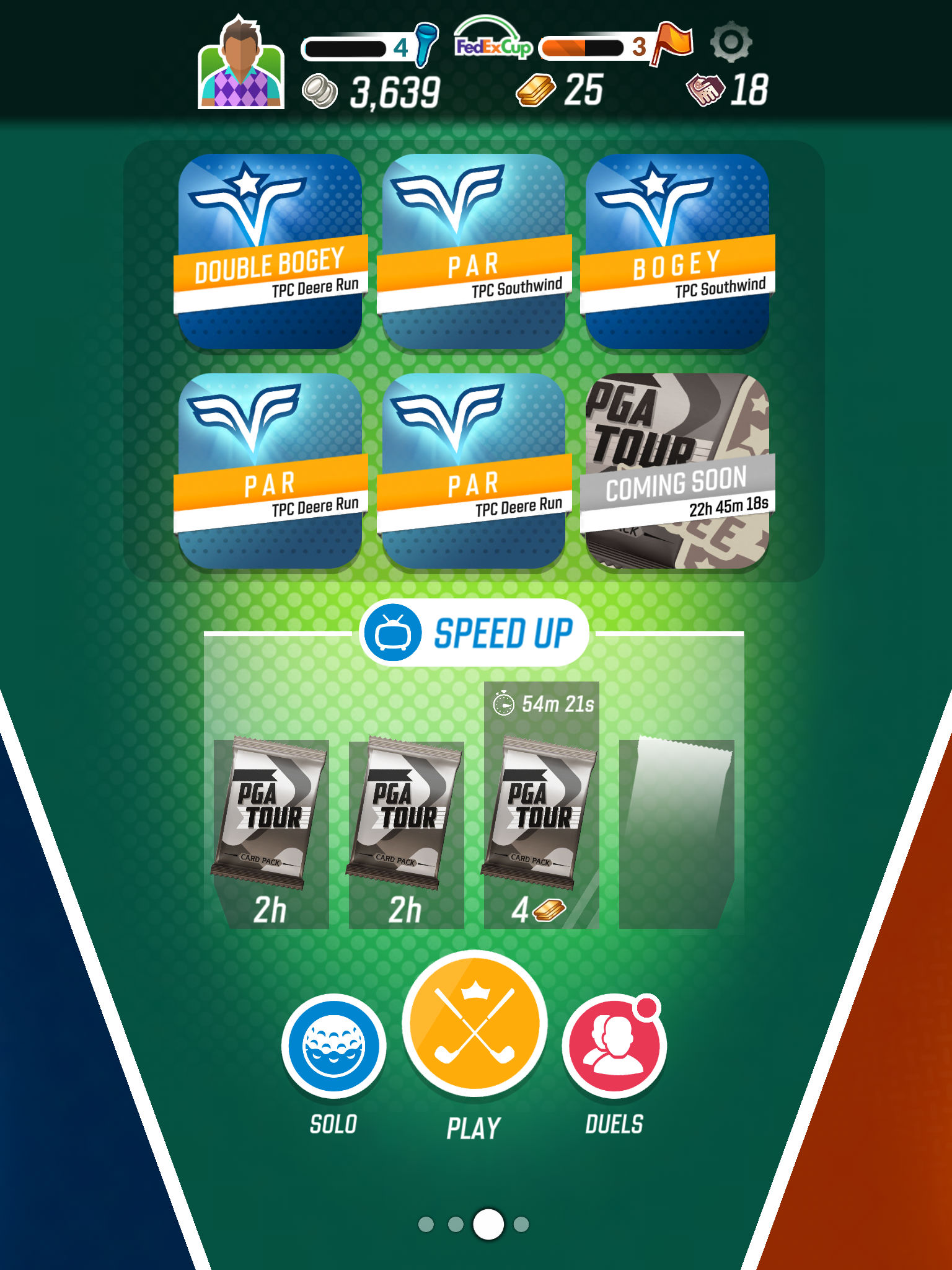 Besides just being shiny and an excellent store of intrinsic value according to the commercials shown on any cable channel that caters to seniors, gold helps out a lot in PGA Tour Golf Shootout. For starters, it allows you to skip the pesky pack-opening timer if you just can’t wait. As we’ve discussed, it’s also good for buying more packs in the store.

So you’re well on your way to doing some things in PGA Tour Golf Shootout, but let’s help you do even more. Look out Tiger, here we come!