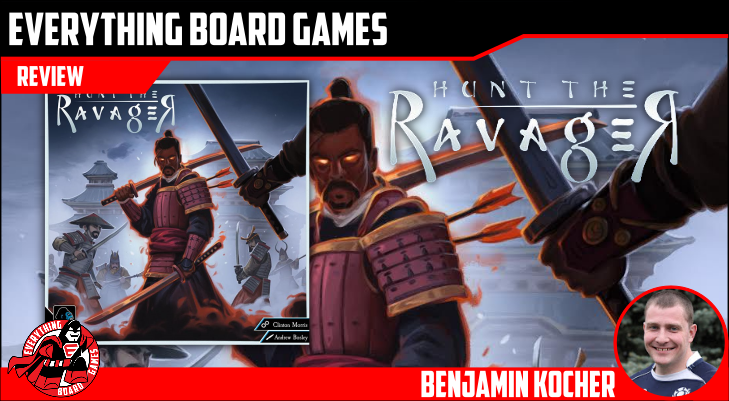 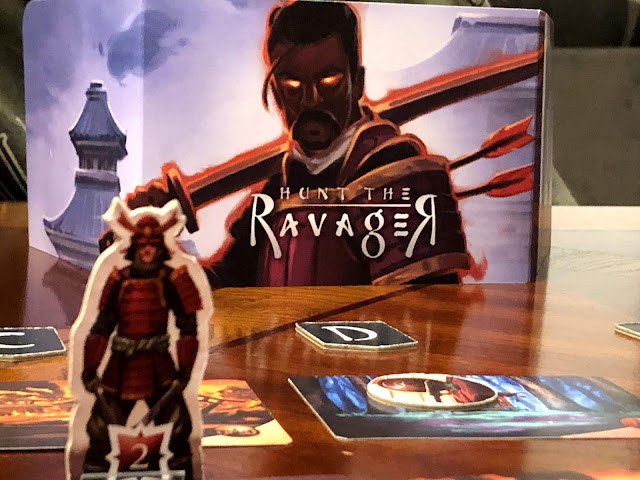 I started following the design of Hunt the Ravager when the designer, Clinton Morris, first brought it to light through some of the board game groups on Facebook. I’m a big fan of hidden movement games, so I was obviously more than intrigued. I was super happy for him when he sold his design to Kolossal Games, and super happy for myself when I was privileged to get to review it prior to its Kickstarter launch.
There are quite a few hidden movement games out there already, so you may be wondering what’s different about this one. While games like Specter Ops are crazy fun, the map can be a little too big at times, and playing with two players isn’t optimal.
Hunt the Ravager, on the other hand, provides a hidden movement game that excels with two players, and the board isn’t so large that it becomes daunting. The mechanics allow for both players to be the seeker and the hider in the same game, which I love. I love hunting, and I love sneaking, so instead of having to chose one over the other, I get both! The actions for the hunter player are well balanced; it’s just enough to give you an edge, but not enough to make it easy. The mechanic for how the sneaky ravager moves adds complexity and a sense of daring, as well. More on that later.
Consider that a brief overview of Hunt the Ravager. There’s a lot of game here, and I’m excited to share my thoughts with you.
Setup: 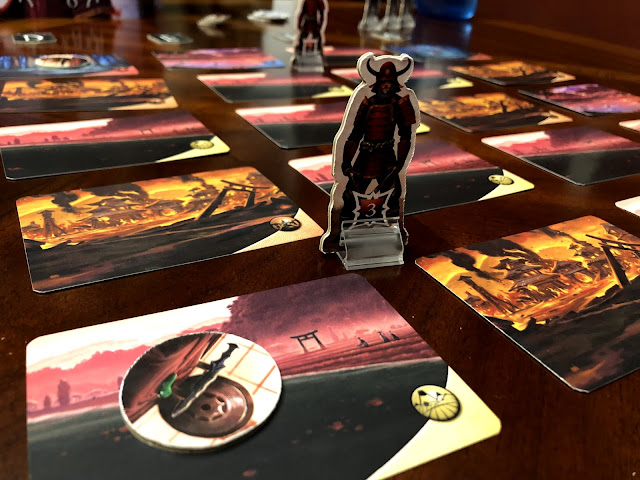 Hunt the Ravager plays with 2, 3, or 4 players, and each player count has a different mode of play. For the sake of ease, I’ll be describing a two-player game. For information on how a three- or four-player game works, check out the rule book.
First, lay out all 35 location cards in a 5×7 grid. Place the A-G tiles along the top, and the 1-5 tiles along the side, each pointing in toward the play area. This helps to identify locations on the grid. The time marker is placed next to the “1” tile, and it will be used to keep track of the turns each round. Each player takes a score sheet. Pick a player to start as the vengeful ravager, and the other plays as the princess, commanding her samurai troops.
The ravager player takes five rage tokens, a screen (so the opponent can’t see the movements written down on the scoring sheet), and picks any location on the grid to be their lair. Keep the lair hidden, or else the princess’ troops will have an easier time tracking you down.
The princess player then places three treasure tokens anywhere on the board. Well, anywhere except an already-devastated location, a pond, or one adjacent to another treasure. What’s neat about this step is that the player placing the treasure has 5 defense points, and each location is worth 0-3 points. So, placing a treasure in a corner is good for hedging in the ravager, but the other placement options will be that much easier, due to having a lack of points to work with. I think it’s a fantastic mechanic.
Once all the treasure is placed, the princess player places all three troops on the grid, each one standing at an intersection (i.e. with four locations diagonal to the troop’s position. Then, the ravager player takes a treasure token, marks down on the movement sheet that location (because that’s where the ravager is starting), and places a footprint token there.
Let the hunt begin!
Gameplay:

Each ravager player has three rounds as the ravager before they switch to be the one hunting the ravager. Each round consists of five turns, and each turn consists of the following:
The ravager may move one or two locations, but doesn’t have to say how many were actually moved. This includes moving one and then returning to the location where the ravager just was as the second. Let me tell you, when you’re in a pickle, that’s a pretty good move, all things considered. When passing over a lake location, the ravager must place a footprint token on it. The ravager may not stop on the lake, but must use a second movement to cross it. The goal of the ravager is to return to the lair before five turns elapse. After five turns are through, if the ravager has failed to deliver, the prize is lost. The ravager may also lose if one of the samurai successfully hunts him down.
When the ravager moves, that player must either play one rage token, or ruin a location. The player only has five rage tokens for three rounds, so it’s important to use them wisely. If the player cannot ruin a location and has no more rage tokens to spend, the round is over, and the ravager loses the treasure.
After the first round ends, either in defeat for the ravager or as a wild success, the board is cleared of footprints, the samurai are set up anew, the ravager chooses the next treasure, and the round plays out as usual.
The actions the samurai have are many. One involves inquiring about a diagonally adjacent location from their current intersection to see if the ravager has traversed that location at any time during the round. If so, the ravager places a footprint token on that location.
Another available action is to force a samurai to make one more move.
The samurai may also use a village or shrine that is touching their current intersection. Asking at a village means that if the ravager has been on that location, or any location adjacent to it (diagonally or orthogonally), that player must place a footprint token on all locations visited at any time during the round. Villages are super useful, especially if you have a hunch the ravager’s lair is nearby. Using the shine allows the princess player to choose any location on the grid and ask if the ravager has been to it at any time during the round. If yes, the ravager places a footprint token on the location.
If the hunter is pretty confident that they know where the ravager is located (or has nothing else to lose), the hunter player may move a samurai onto a location adjacent to its intersection. If the samurai is there, then huzzah for the samurai guy, because the ravager has been captured and the round ends. If, however, the samurai was mistaken, it takes no move on the next turn, and its only actions are to remain on that spot and see if the ravager is there now, or else use the action to move to any adjacent intersection.
After each player has been the ravager for three rounds, points are tallied (four points for each treasure successfully delivered to the lair, one point for each ruined location and remaining rage token when it was your turn to be the ravager, and one point for each defense point left over from when you placed the treasure), and the player with the most points wins. In the event of a tie (and we did tie once), the player with the most treasure wins. To break the tie further, the player who had more points in ruined locations takes the victory.
The game really plays quite smoothly, and the actions and mechanics blend oh-so well. There is a 2v2 variant, as well as a variant for three players. I unfortunately didn’t have the game in my possession long enough to give those a go before writing this review, but knowing how the game plays as 1v1, I can say with some certainty that the other player counts play just as well, thanks to a few tweaks to the rules. Of course, I haven’t put that to the test as of yet, but considering how well the 1v1 game plays out, I am eager to give the other variants a go.
Theme and Mechanics: 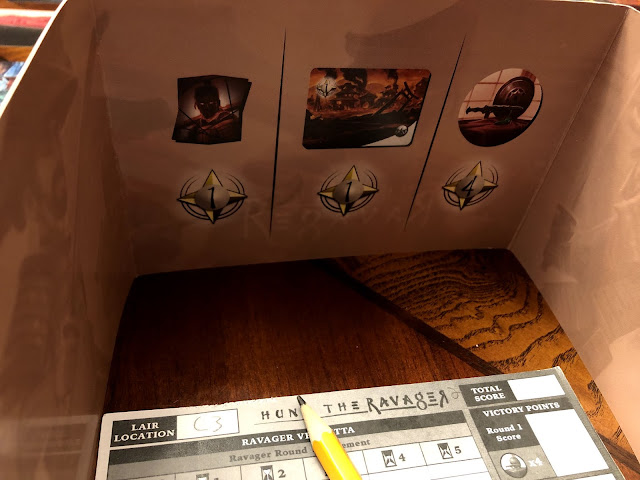 The theme is set in feudal Japan, in which a vengeful ghost is wreaking havoc on the land and making off with treasure. It’s a fun theme, and the mechanics complement it well. Balancing the amount of rage tokens spent versus locations ruined is a neat addition, and brings along with it many wonderful implications.
The hidden movement mechanic is done really well. My wife, who isn’t a huge fan of hidden movement games, enjoyed Hunt the Ravager, and said it was her favorite hidden movement game she’s played, so that’s saying something. For me, it’s definitely up there on the list of hidden movement games. Definitely one of the better ones for small player counts.
Artwork and Components:
The art is wonderful, and it captures the essence of the theme quite nicely. As this is a prototype, I can’t speak on the components, other than the fact that what I was given functioned well.
The Other:
The time frame given on the box says 30-60 minutes. I think it’s certainly possible to play it in that time frame, though I did find that there is a tendency to think, think, and think some more about where to move, what actions to take, and the like. So, if analysis paralysis is a common visitor to your table, just plan on it taking a bit longer.
It was pointed out to me that the game might benefit from a map (of sorts) printed on the back of the scoring sheets, so that players can keep track of possible locations of the ravager throughout the game. I think the game works just fine without a map to track the ravager’s movement as the hunter, but there are some who would prefer having one. Not really a bad thing, but just something that was brought up.
Final Thoughts: 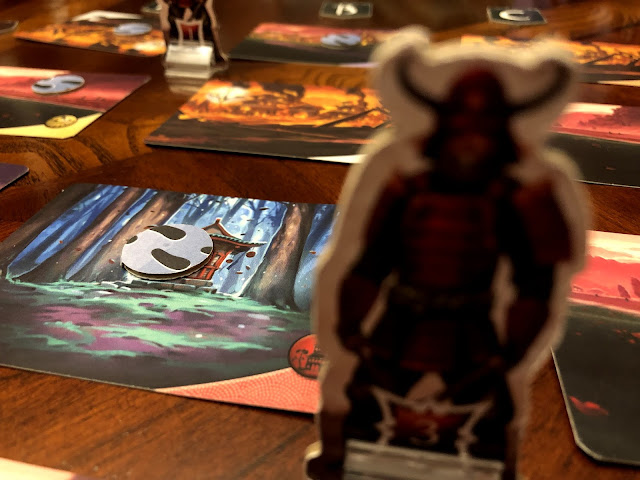 Hunt the Ravager is straight up stressful fun. Sneaking around and making it back to your lair really does get your heart pumping. The variable layout of the grid, combined with the unique mechanics associated with both hunter and hunted, make Hunt the Ravager a game that will certainly stand the test of time. I think it’s a wonderful hidden movement game that will please fans of the mechanic and players new to it as well. It’s not difficult to learn, yet the choices are meaningful and well balanced.
Players Who Like:
If you like hidden movement games, such as Specter Ops, definitely check out Hunt the Ravager. If you like team games, or games set in feudal Japan, this would be a good choice as well.
Check out Hunt the Ravager on:

Benjamin hails from Canada but now lives in Kentucky with his wife and kids. He’s a certified copyeditor through UC San Diego’s Copyediting Extension program. He’s a freelance writer and editor, and covers everything from board game rule books to novels. An avid writer of science fiction and fantasy, it comes as no surprise that his favorite board games are those with rich, engaging themes. When he’s not writing or playing games, Benjamin loves to play ultimate Frisbee, watch and play rugby, and read the most epic fantasy books available. Follow him on Twitter @BenjaminKocher and Instagram @Kocherb, and read his board game-inspired fiction at BenjaminKocher.com.