It feels like only just last week that I tried to juggle attending an anti-Brexit march in the heart of London with catching as many Treecko as possible during the March Community Day in Pokemon GO (Free). Suffice to say, my phone battery took a beating that day, although the beautiful cyan Sceptile that I had to show for it all certainly made the constant battle with phone reception worth it. However, as cool as the previous Pokemon GO events have been, this weekend’s April Community Day is by far the best of the year so far – and perhaps even in the history of the monthly event. That’s right – elusive Generation 3 Dragon-type pseudo-legendary Bagon is the star of tomorrow’s Community Day. This provides the perfect chance to not only acquire the undeniably badass Salamence, but also one of the coolest Shiny variants in the entire game. You don’t want to waste this golden opportunity, but don’t panic – I’ve put together a comprehensive guide so you can make the most of this incredible April Community Day. 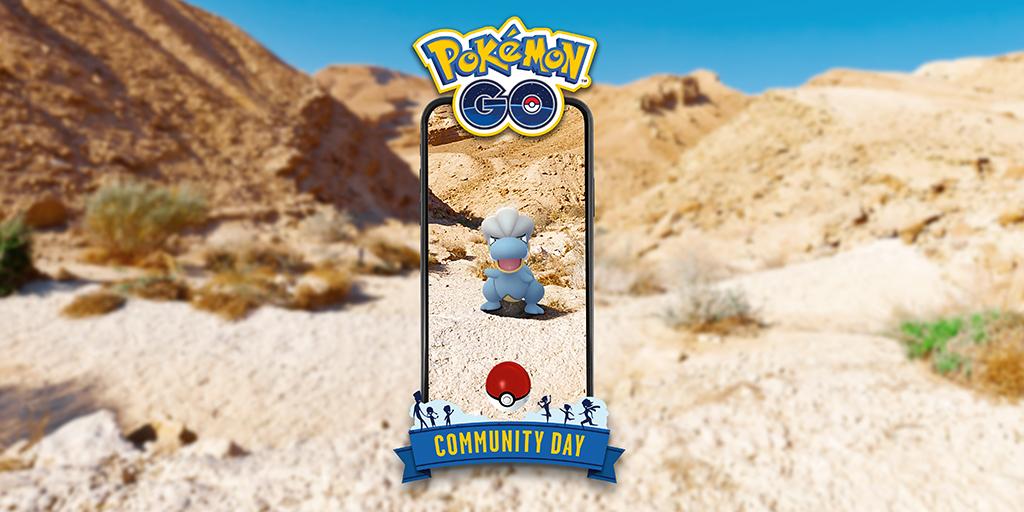 In reality, it feels so soon after the last Community Day because it is actually a lot sooner than we’ve come to expect from Niantic’s marquee Pokemon GO event. It has only been less than three weeks since the previous iteration, likely shifted forward in an attempt to avoid the hustle and bustle of the Easter weekend. Beyond this, there are no big surprises during this Community Day, with it inheriting the new unified timing of last month’s event:

While slightly more tedious in terms of having to wait around for the event to commence, it seems that most gamers did appreciate the more accessible afternoon time – especially with just one obvious time to have to deal with this time around. During this time period, the Rock Head Pokemon Bagon will appear in abundance everywhere within Pokemon GO, spawning in huge swarms and normally taking up the slots of the normal cast of critters you’d find in your region. This is an absolutely golden opportunity to catch loads of the rare Dragon-type monster and collect tons of Bagon candy, which are crucial to powering up the Pokemon and for evolving it into Shelgon and Salamence. There are also a number of other benefits during this time-slot, including:

Bagon is so elusive that, despite having put far too many hours into this cursed game, I haven’t even managed to acquire one prior to this event. It is available through Tier 1 events, which would be a particularly good opportunity to locate one with strong IVs before the event (although there will be plenty of chances to find one tomorrow, for sure). This all underlines the importance of this Community Day event in particular – as well as why it’s so fun to play along with friends. Do check out your local Meetup events to see where all the hardcore trainers are heading; this could be a golden opportunity to trade, make friends and get advice on how to be the very best, like no-one ever was. More so than usual, it’s an even better time to use any stockpiled Lucky Eggs for a frankly ridiculous 6x experience boost for every capture. I may make Level 30 yet! 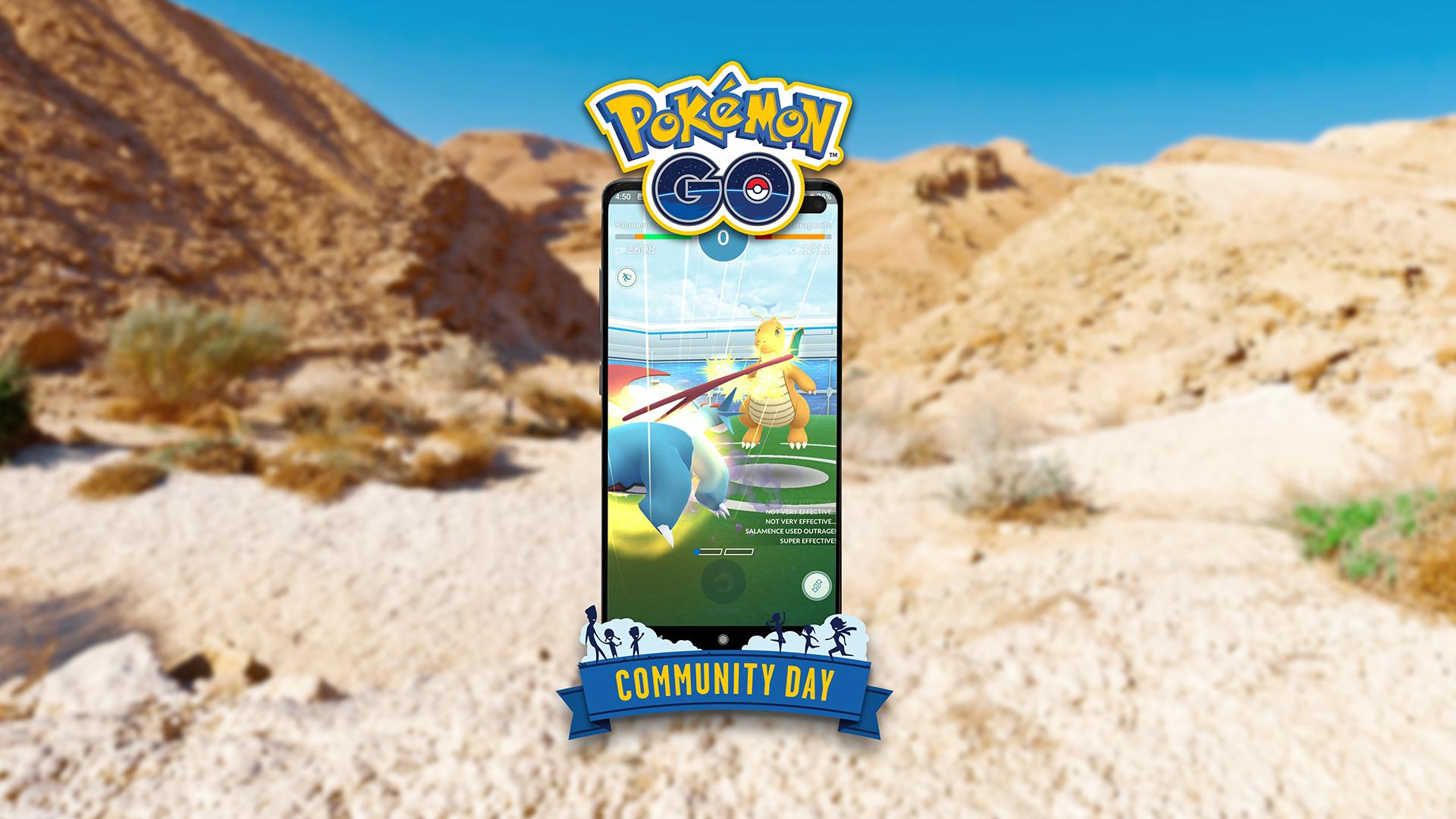 How to add the most powerful Salamence to your party

If my reverence hasn’t been clear enough up to this point, I cannot understate how awesome Salamence is. As a pseudo-legendary in the same tier of Dragonite, Tyranitar and Metagross, Salamence is genuinely one of the strongest creatures you can add to your party, and its Dragon/Flying type combination makes it a worthy competitor with even the likes of the legendary Rayquaza. Having its event-exclusive move being Outrage is a huge perk, as unlike Draco Meteor, it is a two-bar Charge Move. This allows for faster and more reliable offensive output, and gives Salamence one of the very best damage per second stats in the entire metagame. It is also incredibly cool, making Salamence essential for both collectors and competitive players alike.

As we’ve come to expect with three-stage evolutions, Salamance requires 125 Bagon candies to obtain – 25 to evolve Bagon into Shelgon, and a further 100 to morph Shelgon into Salamence. This is approximately 30 captures, although will likely be less in practice with the amount of Bagons you’ll be transferring to Professor Willow over the course of the day. Beyond simply evolution, it’s worth amassing as many candies as possible so you can power-up a number of the Pokemon in the future, to ensure Salamence has a powerful presence in your team. As Bagons are generally so rare, there really isn’t a better time to stockpile its candy; if you have any ambitions of seriously getting into the more competitive aspects of the game, I really cannot understate how important this is over the course of the day.

Like Sceptile, it’s worth noting that Salamence was also blessed with a powerful Mega Evolution in the Pokemon Omega Ruby and Alpha Sapphire games. This notoriously turned an already dominant Pokemon into an absolute beast that ultimately resulted in Mega Salamence being banned entirely from the regular metagame. With rumors of Niantic introducing Mewtwo forms to the game in the near future, it’s only a matter of time until Mega Evolutions make their debut in Pokemon GO. Salamence’s usefulness will only increase when this does happen, so making the most of the April Community Day is a good way of preparing for the future twist and turns of Pokemon GO’s complex metagame. 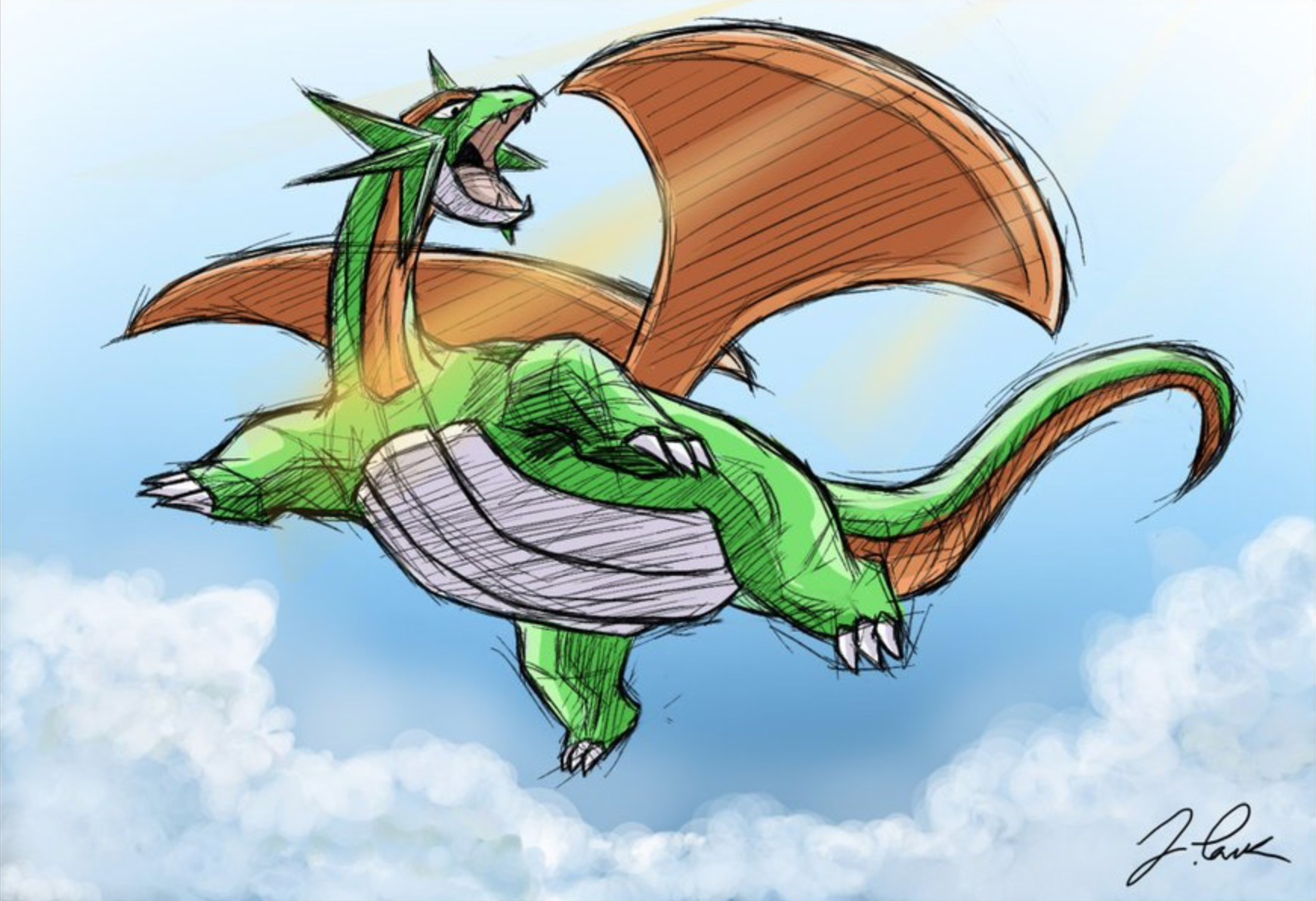 Finding a perfect Shiny Bagon in the wild

Just look at it. Turning the original Salamence – already an absolutely golden example of the best of Pokemon’s creature design – into a sprawling green beast was an absolute masterstroke from Game Freak, in my opinion. As well as its body being an even better match for its crimson wings, there’s just something about the strange almost-blue green color that resonates so strongly to me. In the name of my already tenuous professionalism, I’ll try and collect myself and continue the guide, but as far as Shiny Pokemon go, Salamence is by far one of the most iconic.

With a 1/25 Shiny spawn rate you’ll likely encounter a few, so it’s worth ensuring that you have the strongest possible Shiny Salamence by the end of the April Community Day. The community at r/TheSilphRoad – who I highly recommend following over the course of the event, if not just generally, as they are a fantastic source of all things Pokemon GO – have put together a chart that identifies the CP of a potential perfect Bagon in the wild. This is useful in the latter hours of the event, as when you have enough candy, you can just click on each Bagon and check its CP or whether it’s Shiny. If not, just run and continue your search. One interesting quirk that I discovered last time around is after you have tapped on the Bagon, it will be pointing towards your location on the overworld map. This means that, if you have encountered a particularly large batch of the critters, you know which ones you have already checked. That being said, it’s worth catching as many as you can to make the most of the triple experience bonus of the day. 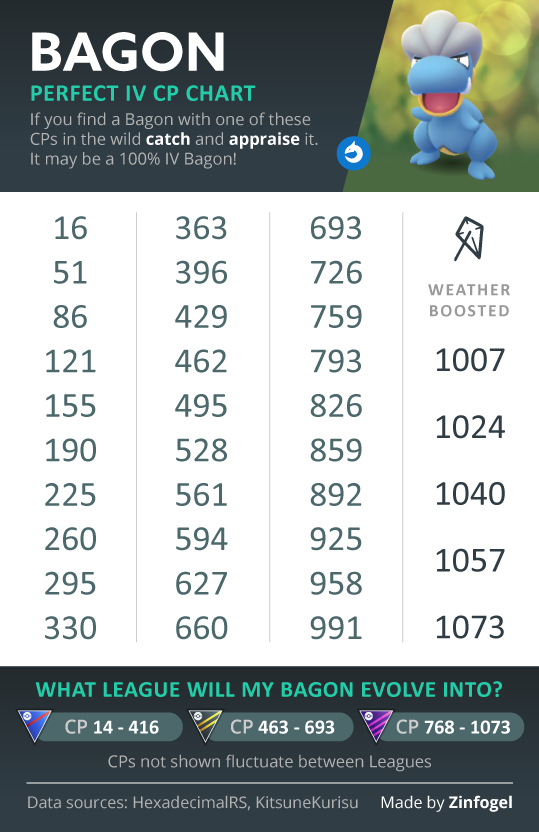 With the introduction of the PvP action, you may be inclined to enlist a Salamence on your team. While I’d generally advise against this, as Salamence serves as a more offensive Pokemon that is better suited to raid battles, it may still be worth looking out for specific CP levels to ensure your Bagon evolves into the right league – these are also displayed in the helpful chart above. If you’re incredibly dedicated and/or mobile, Bagon will benefit through the Windy weather condition. While this will come at the cost of harder captures and even more aggressive Pokemon behaviour during the catching process, it will result in more stardust and even higher CP Bagons to catch. Or you can just use candies on the Pokemon, which you’ll likely have in abundance over the course of the Community Day, but the option is there for those with an affinity for cold, windy Saturday afternoons.

Phew – I think that’s just about everything. If you’re into planning ahead, the next four Community Days have been set for May 19th, June 8th, July 21st and August 3rd, so you will thankfully have slightly more time to recover and charge that portable battery before I come at you hard with the May Community Day. I reckon it’ll be either Torchic, Turtwig or Chimchar – let me know any guesses you may have in the comments, and please share your best captures on our lively Discord server tomorrow. Best of luck, trainers – a beautiful Shiny Salamence is only mere hours away.