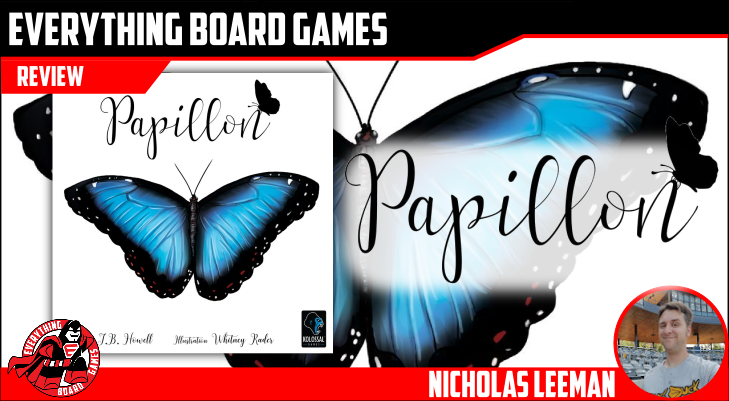 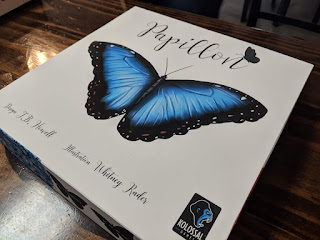 WARNING: This is a first-look preview of Papillon. All components and rules are prototype and subject to change. EBG and myself were given a very limited window for this preview, so we didn’t get the usual time to play test.

tl;dr: Cute butterflies-and-flowers area control with tile laying and drafting. Plays quick and light with lots to look at.

Getting to the Game: Unpack everything, and assemble the flowers as needed. The developer assures me that there’s a plan in place to be able to store the assembled flowers in the box without having to make and unmake them all the time. That would be a big deal and very welcome. Each player gets all their colored butterflies, and then set out the board and tile bag. Tiny gnome tokens will be stacked alongside earthworm tokens, and now you’re all set. Make a starting player order and set your gardener meeple at the top of the board. 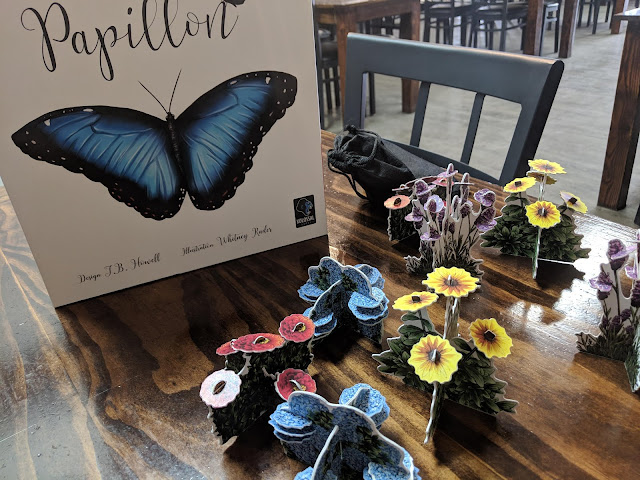 The goal here is twofold: area control on the flowers, and your own tile-laying garden in front of you. You’re going to be drafting sets of tiles from the garden board in the center of the table, which you add to your own personal garden, trying to make large flowerbeds. Once you complete a flowerbed, you add a butterfly to a giant flower of that same color. Each flower has three point values, which get assigned to the winners of each flower, respectively.

Playing the Game: On your turn, you’ll choose a row or column of tiles from the center garden board. If you choose the row with the garden gnome, you’ll get his collection of earthworms, each worth a point at the end of the game. In a two-player game, you’ll also get to move your gardener meeple to the first position at the top of the board, meaning you’ll get to pick first next round. The drafted tiles go into your own personal garden in front of you, building flowerbeds Catan-like, and also creating little clearings with tiny butterflies in them–also worth points at endgame. 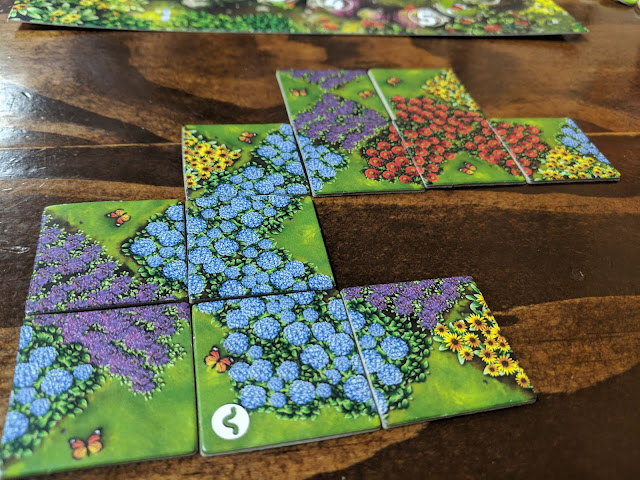 There are various point-salad ways to earn a handful of points, but your majority is going to come from the area control on the giant 3-D flowers. Whenever you complete a patch of flowers in your personal garden, you earn a butterfly. After the drafting phase, each player places their butterflies on the giant flowers, and at game’s end, the player(s) with the most on each flower earns the most points available on that flower, then second most for 2nd place, etc. 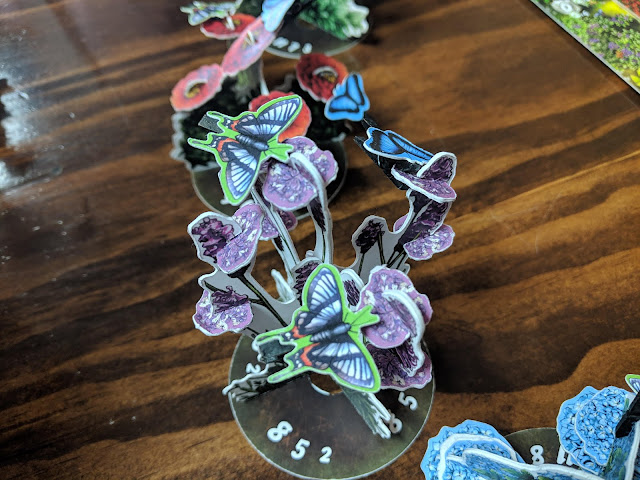 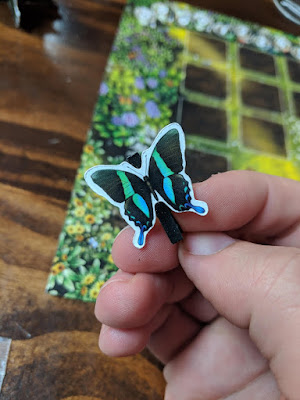 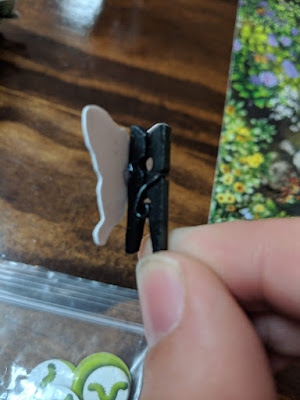 So, “how good is it?” It’s very good. As mentioned above at the very top, it’s worth noting that Kolossal only had a prototype for us a few days before they needed the review done, so I didn’t get as much time with it as I’d like. I played once with one of the Kolossal team, and then twice more at home. All three games were two players, as I couldn’t get a team together to play with the bidding rules–a real shame, since I like that mechanic a lot. As a 2-player game, there’s remarkably a lot to think about for a game that plays as light and fast as this one. Drafting almost always has a calculation to be made: play for yourself or play defense against another. There’s plenty of that here, with tiles being very obviously valuable to another player more than you, and you have to decide how far ahead of them you think you are, and whether you can make the most of the tiles they want. 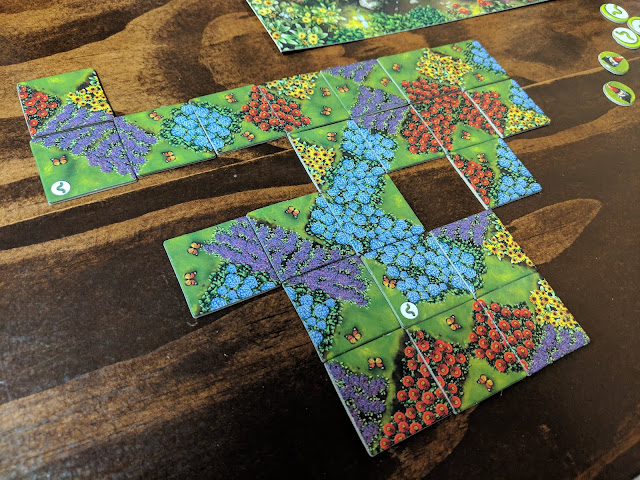 Functionally, there’s plenty to love here as well. Everything looks so good on the table, that you’d be forgiven in thinking this is an all-flash, no-fun game. But there’s depth here as well as eye candy, and even though games are done in 30-40 minutes, I’ve been thinking about each of them since then. Decisions have import, and there’s strategy as well as tactics. The beauty of the title lies in just how much you’ll want to do of each, and how successful you’ll be in reacting vs. planning. A single swipe of the tiles you needed to finish off a giant flowerbed, and you’ll see your well-laid plans wither and die on the vine. Decide to sacrifice points to move into first position for the last round and be rewarded with the perfect row of tiles, and everything comes up roses.

Artwork and Components: Rader’s art is fantastic, evoking a colorful world replete with beauty. The overall aesthetic is well done, keeping a unifying theme across tiles, boards, and flowers. I keep coming back to the butterflies, though, as an example of what can be done with so little space. I’m told that they’ll be bigger than in the photos above when production comes out, but honestly, that’s not the biggest change needed. The butterflies feel just fine in my large hands, and are gorgeous to look at. Bravo to the entire art team. 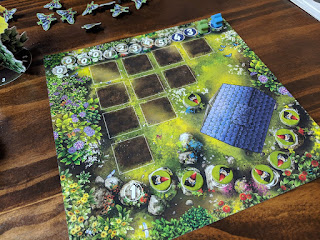 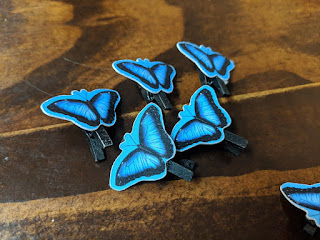 As previously covered, the components look and feel great, even if there’s some tweaking to be done. I don’t mind the size of the butterflies, and if I don’t have to constantly disassemble and reassemble the giant flowers, that would go along way toward me recommending this game. With the gameplay as short as it is, it would be annoying (though not overly so) to have to deal with those every game session.

The Good: Dynamic gameplay, phenomenal art, tight and quick game sessions that feel like you actually played a game rather than just participated in a pretty experience.

The Bad: Game’s almost too short, tile-laying is a huge part of the game–which is a mechanic some don’t care for. But, as always, if a game’s core mechanic isn’t your favorite, play something else.

Score: While I struggled to find things to be critical about here, it’s worth it to note that I did try. Papillon is one of those games that doesn’t try to be too much, but instead opts to really excel at what it does. It meets that threshold smartly, and succeeds at being a gorgeous table presence with just enough meat on the bones to feel like decisions matter. I’m giving Papillon a score of Takes Flight.


Check out Papillon on:

Nicholas has been a board game evangelist for over 10 years now, converting friends and family alike to the hobby. He’s also a trained actor and works summers as one of the PA announcers for the St. Paul Saints. He lives in Minneapolis, MN with his board gaming wife and son.