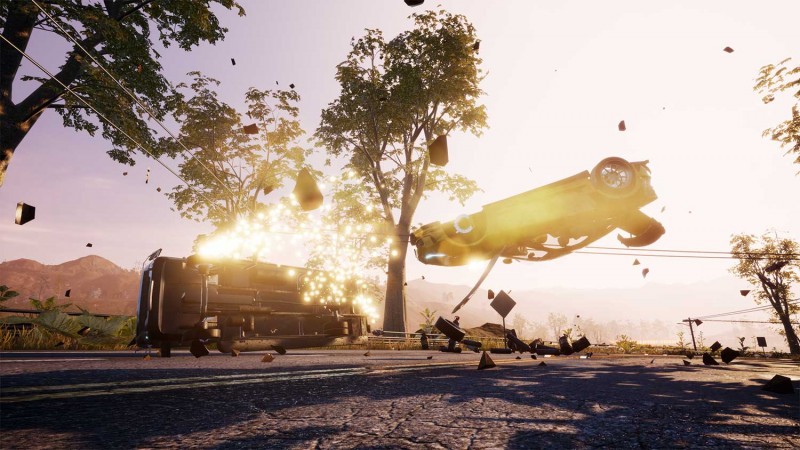 Two of Dangerous Driving’s fundamental tenets – racing and crashing – are at odds with each other. The game has both in equal measure, and they’re enjoyable at times. However, they don’t complement each other to elevate the game to more than what it is on paper: a racing title in which you occasionally marvel at some mangled crashes.

Dangerous Driving is composed of various race types unlocked more-or-less linearly based on your car class (SUV, supercar, formula DD, etc.). The majority of events revolve around racing, whether that’s trying to chain boosts together in Heatwave, going against a single competitor in Face Off, or seeing how far you can get before you crash in Survival. Of course, even if you’re not more focused on knocking out people, like when you’re a cop in Pursuit mode, crashing into others is always an option.

I chuckled at nailing traffic head-on at high speeds, and watching flaming cars flip and crumple. Dangerous Driving definitely has these moments, but it isn’t integrated with the racing in a way to make these crashes more than worth a few laughs. I was often annoyed – even when I sent another car tumbling – because the slow-motion crash interludes took me out of the racing zone. Sometimes you can’t even tell if it’s you or them being smashed. Taking someone out is also disorientating; the race continues in real-time, so you’re suddenly somewhere else on the track than when the hit was first initiated.

After a while, the spectacle of the crashes are less impressive. They give the car more boost, but because this is easy to achieve in other ways like getting air, drifting, or avoiding pile ups, the crashing itself often isn’t necessary. Your competitors are back on the track in no time in the race-orientated modes anyway (multiplayer is planned for after launch), so other than on the last lap or home stretch, it is not ultimately useful. At least later in the game crashes are made slightly more interesting when some events have specific takedown rules, like an opponent must be rubbed out using the A.I. traffic. These stipulations make it harder to get a takedown, but don’t make the crashes more meaningful.

Apart from the oncoming A.I. cars, the environments don’t augment the mayhem. The tracks contain different background scenery, but their assembly of curves and straightaways don’t distinguish themselves from one another. Similarly, car selection isn’t a big deal since the events are tied to each vehicle class, and although you can pick four different variations of each car class, they are specifically suited for a particular race mode (like Tuned vehicles being best for Heatwave races), so there’s not a lot of strategy involved.

Dangerous Driving has some hiccups like momentary pauses in tunnels, rare unexpected car swerves (both yours and the A.I.), slowdown, and inconsistent crash determinations, but these aren’t even why the game misses its target. Previous Three Fields titles like the Danger Zone series and Dangerous Golf had a reason for their destruction, but I can’t find it in Dangerous Driving. The racing itself has some thrills due to its sometimes insane sense of speed, but neither it nor the crashes make their mark.