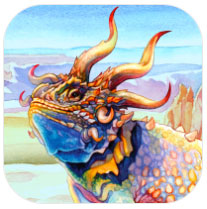 A while ago, our man Jon reviewed a great looking board game called Evolution:Climate (and also Evolution: The Beginning). If you haven’t had time to read the review, the short of it is that he loved it (and he even got a little nerdy at the end with some sciency tidbits).

NorthStar Digital has been working on a digital port of this great game for what feels like forever now. I remember getting shown a demo of it years ago at Gen Con. Well the polishing is apparently done, because Evolution has been released onto our phones and tablets. So let’s fire up the app and see how the translation turned out.

In Evolution, players are trying create the most adaptable species. At the beginning of the game, each player is dealt a handful of trait cards. Each card can be used to either create a new species, increases the population or body size of a species, or used to apply a specific evolutionary trait to one (climbing, cooperation, intelligence, etc…) 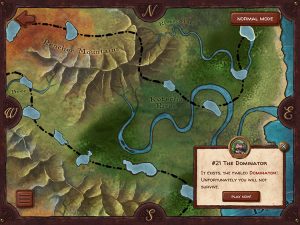 Campaign mode was a lot of fun to play though.

After each player has had a chance to play their cards, they must feed their species with food from the communal watering hole. That hole is populated with food at the start of each round based on the card each player discarded. If there isn’t enough food, population will die.

However, not all is happy-go-lucky in the watering hole. Should someone give one of their species a carnivorous trait, they no longer care about the food in the watering hole, they want some tasty meat. That comes in the form of attacking other player’s species.

Once all players species have been fed (or starved) a new round begins. Players will continue creating new species or adapting their current ones until the draw deck runs out. The player with the most points (based on food collected, population, and traits) wins. 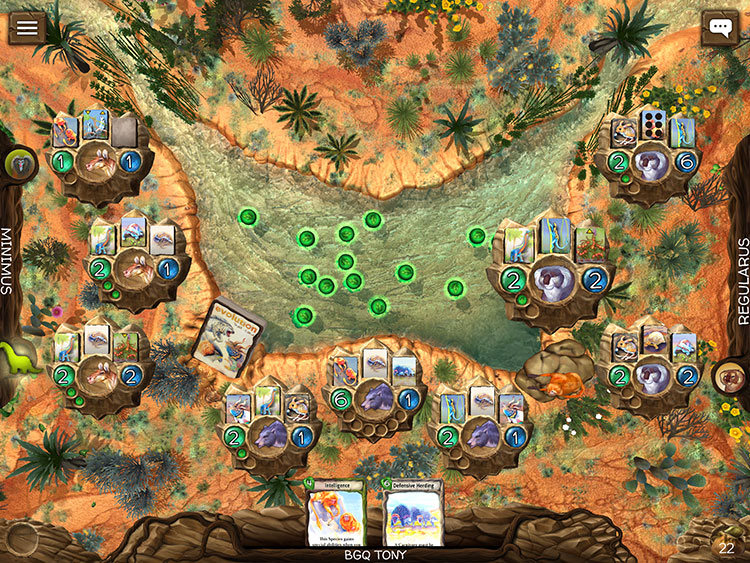 Competition at the watering hole is fierce.

This is the first game I can recall playing for NorthStar Digital, but they did an absolute bang up job with Evolution. The graphics are beautiful, the game play is smooth, and the app offers multiple ways to play.

The gameplay is just as solid as the tabletop version (albeit it doesn’t have the Climate expansion). Evolution is a constant battle of trying to gain the most food at the watering hole. There is a bit of engine building as you try to gear up your species to be the most efficient of the group. And once carnivores show up, there is a lot of back and forth as other players need to gain defensive traits, while the carnivores need to figure out ways around that. There isn’t much point is having a massive 6 body size predator when all your prey can climb trees and you can’t. 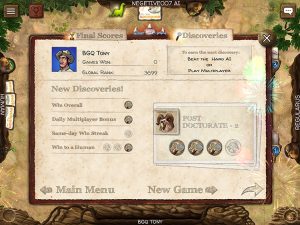 Players can earn achievements and unlock new portraits and sketches.

One of the real stars of the app was the campaign mode. With 21 different levels, the campaign mode not only eases players into the game with a tutorial, but slowly introduces new traits to them. The levels also got more challenging as players work their way though, making this a great introduction for both new and existing players.

Once you’ve finished campaign mode, then you can either play offline vs AI (4 Levels) or online in live mode. Sadly, there is no pass and play options for offline play, or asynchronous online mode. Playing online was smooth with some automatic matchmaking. A full game takes about 10-15 minutes, which wasn’t too bad. Should a player drop out, they will be replaced by an AI.

NorthStar Digital appears to be encouraging players to play online though, as since launch they have been giving away 10 games a day of the tabletop version for the first 100 days. Just have to play in one multiplayer game a day to enter.

The app also encourages you to play by unlocking new portraits, sketches of animals, and even giving you science facts on the loading screen. I can tell that Evolution has given a lot of attention to detail in its design. Such as when the watering hole is full of food, the whole screen will grow green as food sprouts up everywhere. Overall, I really enjoyed the visuals of the game (including the great artwork from the board game). 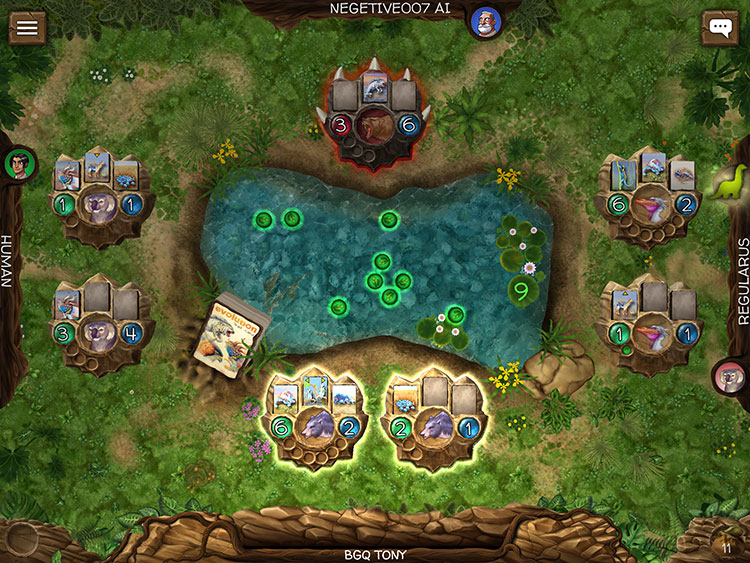 The graphics around the watering hole will change depending on the amount of food available.

The digital version of Evolution is a fantastic port that helps set the bar for what a digital app should be. While it’s missing pass and play and asynchronous online play, those are minor quibbles in what is otherwise a solid digital implementation of a great game. Campaign mode in Evolution was an excellent addition, online play was smooth, and the visual look outstanding.

If you want to give this one a try, Evolution is free to download and play, allowing you to try the first 7 levels of campaign mode. Should you wish to unlock the full game, a $9.99 IAP will give you access to everything else.

Final Score: 5 Stars – An excellent adaptation of an already great tabletop game. This one is an easy purchase decision.

Hits:
• Beautiful graphics
• Nice thematic touches like science facts and gameplay tips
• Campaign mode was a great addition
• Free to try out, with one purchase to unlock everything

Misses:
• No pass and play
• No asynchronous online play