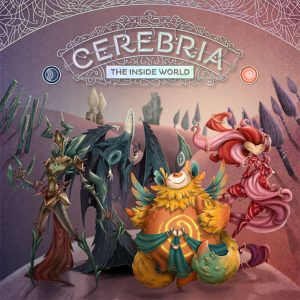 It’s time to really see what is going on inside that head of yours. Today we are taking a look at Cerebria, an area control game where players will fight for the control over, well, somebody’s brain. Reminiscent of Disney’s Inside Out, player’s will take the role of personified spirits using emotions to control the different aspects of the human mind.

Cerebria is an area control game for 1-4 players (or up to 6 with the Balance expansion). It is played with players divided into two teams and therefore plays best with 2 or 4 players. It takes about 2 hours to play.

In Cerebria, players will form teams of spirits fighting for control over, essentially, the inner psyche of someone. The teams, named Bliss and Gloom, will fight for control of the various realms and frontiers of the mind, which overlap, to fulfill the aspirations of… well, whoever it is we are controlling here.

Throughout Cerebria you’ll be managing a number of resources which are at your disposal. The main currency being willpower, which is required to activate many of the different actions available to you. You’ll also have a hand of emotion cards. These emotion cards can be played to one of the 15 different spots on the game board. The board is divided into 5 realms (which each contain 4 cards) and 5 frontiers (3 cards each). Every card exists in at least one frontier and one realm, but some can straddle the line between multiple. The final resource you’ll have at your disposal is essence, which is required to play emotions and to increase their effect throughout the game. 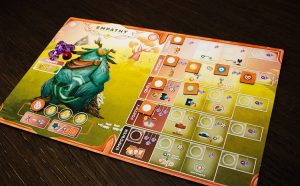 Each spirit board shows some of the available actions, their upgrades, and your unique ability.

Each turn a player will get to perform three actions plus a free “absorb” action. There are 10 actions available to you—one associated with each of the five realms and five on your spirit board. If you perform an action associated with a realm you control, you’ll get a discount on the required willpower. Most of the actions relate to gaining more resources, playing cards to the board near your figure, or moving your figure around Cerebria. You can also quell the emotions of the other team, weakening their presence or removing an emotion from the board entirely.

It is during these scoring phases that the aspirations are checked. These are essentially area majority checks each team is working to accomplish. There is a main goal that is public to both teams and each team has its own private goal. If you have the majority for both the public and private aspiration, you get to add a large fragment to the center of the Origin, scoring points for your team. Teams that only win one of the majorities add a small segment and if a team isn’t the majority of either goal they will score nothing.

The game continues until a team needs to add a fragment but doesn’t have the appropriate size available. In that case, they add their capping piece and final scores are tallied. There are additional actions throughout the game that can score points and if a team reaches 20 points, the game can end prior to the capping piece being added. The team with the most points is the winner. 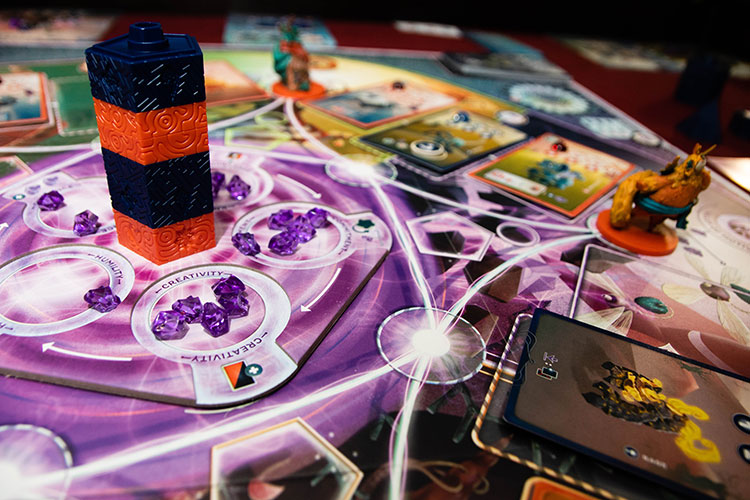 You’ll absorb willpower from the center as you attempt to add your fragments.

From a gameplay standpoint, Cerebria is a tough game to really get a handle on. On the face of it, it’s a simple area control game where the areas you really care about change throughout the game as you’ll be trying to accomplish just two aspirations at a time. Maybe the current aspirations are controlling the most frontiers and having the most essence on the board. But as soon as scoring happens, those will go away and you’ll have to shift focus to entirely new goals.

For the public goals, you’ll always know what is coming. All of the aspirations are face-up at the start of the game, so you can certainly make an effort to keep the next couple goals in mind so you are setting yourself up for future successes. If you do poorly in a particular scoring phase you’ll have the opportunity to remove one of the public goals and you’ll get to choose one of the top three of your private aspiration deck, allowing you some choice and giving Cerebria a bit of a catch-up mechanism. 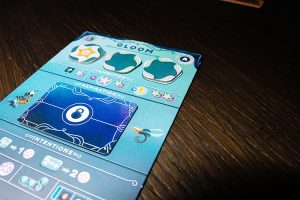 Players on each team share aspiration goals that they must try to meet.

Boiling everything down into those two paragraphs doesn’t do justice to how difficult it is to actually navigate accomplishing those goals. We’ve touched on the fact that there are ten actions you can take throughout your turn. But the absorb action has to be factored in as well because it gives you both additional willpower and, potentially, a bonus action like drawing a card gaining essence. Your individual spirit board, which contains five of the actions, can also be upgraded, allowing you to perform more powerful actions at an increased cost.

If that doesn’t give you enough to consider on your turn, each of the emotion cards has an ability as well. Many of them trigger when played or are persistent effects that emotion gives its team. And each of those emotions can also be upgraded with the empower action, giving you a stronger effect. Each team is given a small book that outlines all of the Bliss or Gloom emotion cards and what they do. The rules suggest not playing with the empower action for your first couple of games—you should heed that advice.

The actions, card powers, absorb bonuses and upgrade options give you a nearly infinite number of possibilities. The way each action interacts with the board and with the other actions available to you is, at times, brilliant. The overlapping of realms and frontiers, and how they can block and influence each other, add a layer of tactics that I never recall seeing in other games. You can also build fortresses on the board that adds to your area control and, if timed correctly with a section of the Origin becoming empty, give you additional victory points, giving players a reason to look ahead more than just to the next turn. 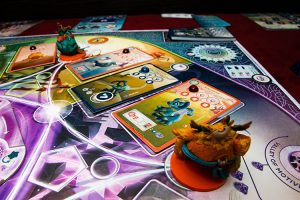 Emotions are played to win control of Cerebria’s realms and frontiers.

While Cerebria is best played with four players, in teams of two, it can be played 1v1 or 1v2 as well with minimal changes. The team aspect is somewhat limited as you don’t share resources but are working toward the same goals.

As an experience, your first game will likely feel like you went through some motions and then the game was over. The theme comes through surprisingly well as each spirit and emotion evokes the feelings you certainly would expect—Malice going around spreading fear and panic makes a lot of sense. The production here goes a long way in making the theme come through as there is wonderful art for each emotion card. There are also pre-painted miniatures that were available during the Kickstarter that are among the best minis I’ve seen in a board game.

If there is a negative here, it’s that Cerebria lacks any big moments. While that is problematic sometimes of area control games as a whole, the complexity and production here lead you to believe there is going to be a payoff that just never comes. Everything about Cerebria is beautiful and enjoyable. I can even get behind having dozens of options and hundreds of permutations to consider each turn if there is some amazingly clever outcome from the use of all that brain power. It is entirely tactics driven and there is no planning for the long-haul available to you anywhere in Cerebria. The mind is perhaps too fickle for that. 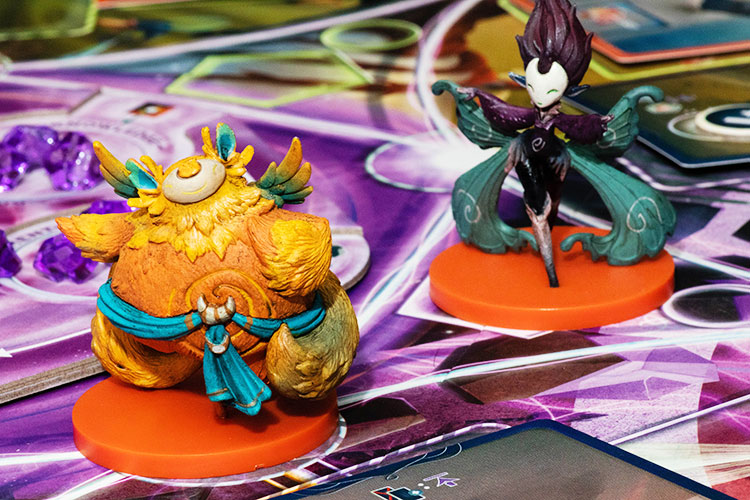 The prepainted miniatures are some of the best-produced board game components I’ve ever seen.

Cerebria is a difficult game to judge. The lack of any real long-term payoff means even the best plan gives you a handful of points. There are no big moments in Cerebria but just a lot of small victories that you try to get to add up to your team coming out on top. There is plenty to like here but Cerebria certainly isn’t going to be a game for everyone as the rules complexity outweighs the payoff in a big way.

Generally, I’m willing to deal with high rules complexity when the game pays off that investment with tough, thoughtful, and impactful decisions. Cerebria, at times, doesn’t make your decisions matter enough as you can find yourself agonizing over which plan to choose for what feels like hours only to realize the difference in outcome is really if you end up with one willpower at the end of the turn or two. That said, the production goes a long way to soothe discontent as it just pops off the table and the theme plays out seamlessly.

Hits:
• One of the best-produced board games ever.
• Unique interaction between different sections of area control.
• Lots of replay value with optional rules that can be added in as players gain experience.

Misses:
• Lacking impactful game-defining moments.
• Can be tough to learn and teach.